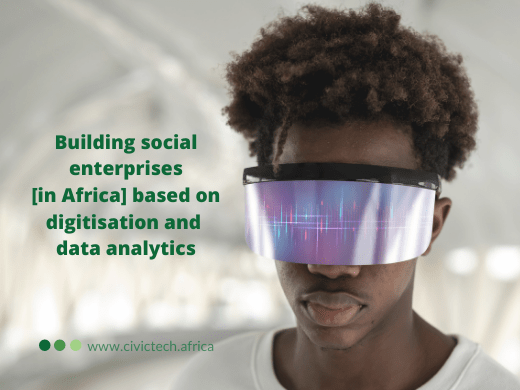 In an era of the Fourth Industrial Revolution (4IR), climate change, high poverty levels, and deep inequalities, the challenge remains how to harness the potential of big data and data analytics in order to come up with innovative solutions to various societal problems.

CTIN recently hosted a webinar on building social enterprises in Africa based on digitisation and data analytics. The conversation aimed to explore how digital technologies and new data capabilities might be leveraged by social entrepreneurs and civically-minded young Africans to address pertinent issues and create livelihood opportunities.

Facilitated by Lesley Williams, CEO of Tshimologong Precinct – this conversation was particularly insightful due to the rich and diverse experience of the illustrious panel of speakers which included:

Social entrepreneurship has become one of the most spoken about terms in the social problem-solving space.  However, the definition of “social entrepreneurship” remains broad and vague. The discussion kicked off with the panellists emphasizing the highly contextual nature of social enterprises and social entrepreneurship, meaning that they can be interpreted in varying ways depending on the sets of activities they might be undertaking, as well as the principles and goals of the institutions advocating for them. They concluded that social entrepreneurship is a blend of complex social values and commercial business activities in the pursuit of positive and impactful change, with long term sustainability.

“One has to be able to distinguish between a social entrepreneur and social enterprise” – Prof Celik, Wits University

According to Prof. Celik “one has to be able to distinguish between a social entrepreneur and social enterprise.” He argues that organisations trying to create a positive impact for the public can be viewed as social enterprises. However, this requires entrepreneurial ecosystems in which these enterprises are situated to be created as this will influence the success of the ecosystem.

Having resolved on definitions, the issue of big-data was then brought into the conversation with the aim of identifying the opportunities and challenges that arise from the accelerating proliferation of data and the increasing capabilities using that data productively – in this case, to be used in endeavours aimed at fast-tracking positive social change.

It turns out that how big data and data analytics are used and their role in social innovation are also topics of debate. The contemporary big data debates bring to the fore key questions on issues such as access, privacy, safety, the usefulness of data and representation. The recent gains in fields such as financial and digital technology (fintech) require states, civil society and the private sector to deeply question how social enterprises could benefit more through big data and analytics –  transforming eligibility assessment to reduce bias or improve targeting, the measurement of social impact, and support for scaling.

“Big Data” captures the idea of managing vast amounts of data using a variety of modern computing technologies and infrastructure from a variety of different sources. (Wits University)

The speakers identified the existing chasm between the potential of data-driven intelligence and its use in addressing social problems. In South Africa, big-data and new digital platforms have been useful in developing innovations that solve societal issues. An example cited as Namola, which enables users to access emergency assistance at the push of a button.  Users request help on the Namola app, Namola operators quickly call back to verify the details of the request, and they then dispatch the emergency service providers required. Another app, GovChat, is South Africa’s largest civic engagement platform accessible online, on any mobile handset and feature phones. GovChat leverages administrative data to offer a chatbot interaction via WhatsApp which is used to enable an interaction between the government and citizens. It has been applied to monitor and evaluate provinces’ and municipalities’ service delivery, response times, failures and successes, and corruption, in real-time.

“It is about creating an enabling environment; data alone is not helpful.” – Claudia Juech, Cloudera Foundation

Supporting the great need and potential to use data for positive change, Juech said she sees the promise big-data brings to every sector, including agriculture. She cites an example from Cloudera Foundation’s engagements in Burkina Faso where she has seen an organisation that collects data on behalf of the government. This data is used to diagnose and distinguish diseases and identify treatments.

However, the challenge remains how big-data can be effectively harnessed to sustainably solve the most critical and human social problems such as food security, climate change and poverty. While big data and data analytics have the potential to change decision-making processes for entrepreneurs, countries and civil society, there is limited understanding and intervention into how enabling ecosystems can be developed to embrace and support the actualisation of this. The question of how big data and data analytics can be successfully exploited towards achieving social good and sustainable change becomes an important question in how social innovation is supported through policies and institutions, particularly when data has become a commodity!

Talking to the issue of ecosystems and sustainability of social enterprises, Dr Nkomo said: “people should be able to transform their environment by using their knowledge – building sustainability by developing capacity in society, creating jobs and financially sustainable solutions.”

Non-profit organisations were used as an example of how organisations that traditionally focused solely on donations for revenue are increasingly struggling to be sustainable. On the other hand, the social enterprise model is different in that it hybridises; it employs commercial business models while addressing social problems, sometimes also tapping into a diversity of funding streams including from grants. This mitigates the financial hardship of solely depending on donors and government-generated funding.

Furthermore, recent years have seen a growing number of new hybrid options for financing social impact organisations. The distinct dual mission [profit and purpose] of social enterprises requires an exploration of the nuances around the funding and structuring of social enterprises, and how these influence the decisions and strategies of funders.  With this said, it has become apparent that social enterprises need to demonstrate that their business models work, regardless of how interesting their value proposition may be; organisations need to demonstrate how they ensure/measure social impact, and how they will sustain their activity.

Bridging the gap between academia and entrepreneurs

“There is a disconnect… There is a lot of data that is untapped in academia. It is about how we bridge the gap between academia and entrepreneurs to lessen the increase in social problems. It’s not scientists who see these problems – social entrepreneurs are the ones. We need interdisciplinary ways of problem-solving.” – Dr Nkomo, Embedded Ingenuity / Hailer Technologies

While big-data has great potential to inform decision-making in solving some of Africa’s toughest social problems such as human trafficking, issues relating to data collection pose a challenge as the data are largely unstructured and unmanaged. The lack of structured data for addressing social problems is a result of poorly managed administrative systems, lack of data governance, unreliable data, and the fact that data uses can result in unintended consequences.

Nevertheless, there is a proliferation of open data platforms, where citizens are creating new products and ideas to solve their community problems. National data platforms or banks would be key in addressing these challenges, provided these data platforms have the capacity to hold multiple different data types, ensuring that social entrepreneurs and citizens have access to well-curated data sets from the government and corporate sectors. A multi-sector alliance that promotes data sharing on thematic issues is one way of democratically ensuring this.

We use cookies on our website to give you the most relevant experience by remembering your preferences and repeat visits. By clicking “Accept”, you consent to the use of ALL the cookies.
Cookie settingsACCEPT
Manage consent

This website uses cookies to improve your experience while you navigate through the website. Out of these, the cookies that are categorized as necessary are stored on your browser as they are essential for the working of basic functionalities of the website. We also use third-party cookies that help us analyze and understand how you use this website. These cookies will be stored in your browser only with your consent. You also have the option to opt-out of these cookies. But opting out of some of these cookies may affect your browsing experience.
Necessary Always Enabled

Any cookies that may not be particularly necessary for the website to function and is used specifically to collect user personal data via analytics, ads, other embedded contents are termed as non-necessary cookies. It is mandatory to procure user consent prior to running these cookies on your website.