#DIYAFRICA: Experimenting and challenging ideas in the digital space

Melesse will be speaking at our upcoming event, Civic Tech Innovation Forum 2021. Digital Rogue Society Experiment Group aims to challenge and experiment with ideas in the digital space. According to their website, the organisation “advocates for digital civic solutions for individuals, civil society organizations, the business sector, and the government to address undemocratic practices. Digital Rogue implements its programs in nine regions and two city administrations in Ethiopia”.

Tell us about Digital Rogue Society and the work you do in Ethiopia?

Digital Rogue Society Experiment group was established in December 2019. It was founded by seven professionals who are from different career backgrounds. Most of us are lawyers, with one in management, IT, a musician and a social worker, and we are composed of people with these diverse skill sets. We had a start-up where we worked on catalysing accessibility of finance for individuals and small and medium enterprises using smart scoring. We worked on this initiative for three years and we observed setbacks especially on the legislative side. We wanted to establish a civil society organisation with the motive of addressing the advocacy gap that we observed across the start-up ecosystem.

The Ethiopian population is more than 110 million and the culture is deep-rooted and we have different cultural norms. We want all Ethiopians to be digitally included and can have conversations and interact with each other online, despite these differences. Another main concern we observed is that Ethiopia is laying a foundation to build a digital economy and we have witnessed diverse actors such as start-ups, companies, entrepreneurs, investors coming into the country and many people in Ethiopia do not understand privacy, data and consumer protection is low. So we need to inform the community, citizens, in these areas.

The thematic areas of focus for our organisation are informing citizens on areas of digital rights, elections, privacy and consumer protection and informing citizens regarding issues on civic engagement. When you have an informed citizenry then he or she can ask the government or can report the government for any kind of misconduct or illegal encounters. In Ethiopia, we have been witnessing misinformation, disinformation especially on Facebook and we want to tackle this problem.

How does your organisation work and how do citizens engage with it or use it?

At the Digital Rogue Society Experiment Group, we are developing different kinds of civic technology products. For example, we implemented an experiment during the elections landscape and we served as a licensed adviser for the national electoral board for Ethiopia. We taught people online on voter education for over three months to inform people about the electoral process and we reached more than 400,000 people. It is all about accessing the information on the election process and for voters to get the necessary information about the election process, what mandates of these political parties are and what is required by the election commission. We disseminated the information using different kinds of educational content: infographics, written content, animated videos and we disseminated this content using two local languages. 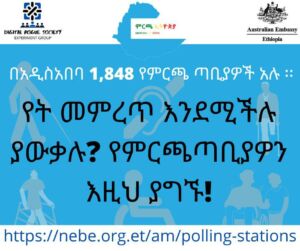 How are you transforming civic engagements using digital technologies?

We first have to understand our target audience and the kind of tools they require. For example during the elections we mainly used websites and social media platforms: Facebook, Twitter, Telegram and Instagram to deliver content. For Instagram, we used infographics and videos. So it depends on the audience.

What impact has the organisation had in Ethiopia?

For online voter education, the impact starts from analysing how many people we have reached and how many people have obtained or accessed our content using their devices, which was 400,000. During online voter education, we witnessed different kinds of engagements. Some people called to ask questions regarding the electoral process. I think I am safe in saying that voters primarily called us before they even called the national electoral body and we referred them to people who they can contact in their areas. So I think I’m safe in saying that within this short period we contributed to conducting a safe and fair election.

What does #DIYAfrica mean to you?

There is this saying that you have to solve your problems, nobody’s going to come and solve your problems for you. So if you are not going to take the lead, you can’t just sit and wait for the answers to be given to you, you have to face the challenges and reflect. I think the major thing that I have learned in regards to ‘do it yourself’ is about self-reflection. You have to reflect, you have to know what kind of story you want to tell the world or your community and nobody’s going to do it for you.

We look forward to hosting you at CTIF21, What would you like the audience to take away from you or the Digital Rogue Society?

I was reading an article that said that every nationality living in Ethiopia is recognised by the Ethiopian House of Federation but there is a new community that is not recognised by the federation. That community is the digital community and we have an attitude or we reflect our emotions, opinions on the digital space, contrary to what we as a person reflect. So we try to be rogue, so we try to be against the system and challenge opinions. So we want to experiment with those opinions. After the experimentation, we have to reach some kind of result. So I think experimentation of the digital space’s opinions, and the digital ecosystem needs to be assessed.

The Civic Tech Innovation Forum will be held on September 13–17 and for more details, click here.

What open data is out there? Where do you find it and what can you do with it? We review ten South African and African…

Don’t sabotage your success by choosing — or building — the wrong tech. Alidade offers a free step-by-step guide to choosing tech, and creating a…