The building of civic tech community is growing across the continent. Various organisations are building tools to monitor parliaments, accountability, transparency and even tech solutions to report potholes, water leaks, power cuts, report corruption and more. However, we wondered whether civic tech has made any significant change and/or delivered on its promises.

Various civic tech minds shared some of their thoughts on the promises of civic tech during a webinar session which was moderated by Zukiswa Kota from PSAM. Al Kags, co-founder of the Open Institute in Kenya was the main speaker, with Nathalie Dikman from SEMA in Uganda and Richard Gevers from Open Cities Lab in South Africa, who were part of the panel.

Here are some key takeaways from this fruitful discussion. Civic Tech should be people/user/citizen centred Kags suggested that civic tech has been a promising idea since 2005, with the goal of solving problems with interesting tools to report potholes, mapping and election assistance. Although many tools and platforms have been built Kags has observed that civic tech has fallen short when it comes to awareness and usage of these platforms.

“In 2010 to about 2012 the civic tech community started having the conversation about the lack of awareness and usage brought by the civic tech hype as there was no notifiable usage of civic tech and we realised there is a case to be made for civic tech’s sake, i.e. for the people,” explained Kags.

The co-founder further added that in this case the hype is when we overemphasise success/impact and underemphasise the failures. He hopes that we are at the end of a hype bubble and we must accept that some tech dies and other survive.

Gevers who has developed tools such as SCODA, Narratives of Home, Citizen Science, Graffiti App and various other platforms agreed with Kags saying, “Some of the challenges of civic tech are the need for capacity building within governments, communities, and institutions when it comes to civic tech, because there is too much focus on the tech and less on the people when we should rather be focused on the people.”

One solution to this challenge is that government could enable capacity building to ensure that they can access the views and perspectives of the public to ensure effective context-based solutions and the momentum should be used to drive and focus government on the insights of civic tech groups to optimise government initiatives and responses; time for collaboration and integration of systems and processes.
Kags adds that going forward we should build faith in civic tech in Africa. “As the community grows, civic tech has to be built with users in mind and we should be clear about the capabilities of it, because we should not over-claim the impact of civic tech because then we lose sight of the real impact of civic tech.”

High tech is not always necessary in civic tech; build tech solutions for equality, participation and inclusion. The speakers agreed that high or complex tech alienates the public and furthers the injustices brought on by technology such as accessibility and affordability issues. “Civic tech is not just about high tech, more important values of inclusion and participation should be central, said Kags.

Dijkman shared her experience of high tech and low tech, “High tech or complex tech solutions are not really effective considering the users/context. For example, we developed various tools for corruption, like the iPaid a Bribe in Uganda and it failed because it was an expensive and complex technology.” She added that it is easier for citizens to engage and use a low tech tool because it does not require much from the citizens, usually ordinary citizens want to be able to comment or engage with service delivery issues; implement devices in public service stations and low tech provides these features.

Gevers raised the important aspect of citizen participation, saying tech does not lead to participation. He said civic tech needs to rather focus on people more than the tech, because sometimes it’s not a “sexy” app that a community needs but rather the usual tech such as radio. He said WhatsApp can work more effectively for some communities.

Kags mentioned that as civic tech is moving to advance with new technologies such smart cities, data and biometrics and biodata technologies, it may lead to the danger of excluding the people civic tech initially was meant to help. Civic tech ends up reinforcing the injustices by exclusion and leaving a good part of society out of participating on issues that affect them.

Dijkman said cheaper, low tech solutions have worked in improving public service delivery in East Africa, because they are accessible and easy to use for the citizens. She urged the civic tech community to try to leverage gamification techniques with their tools. This means less shaming of institutions that are not performing well and rather using rewarding systems to reward those who are doing a great job. SEMA, the organisation she works for, applies gamification and aesthetics to influence behaviour, dialogue and emotions of those who work in service delivery in East Africa. A good example of this point is the Integrity Idol launched in South Africa in 2019.

Kags also urged the community to figure out what civic tech means, is it tech which reinforces injustices and excludes the people it affects? Is it tech which makes the data inaccessible? And it is tech which is presented in complex interfaces for the ordinary civilian? Dijkman explained that another tool which improves civic tech is visualisations. She said when they present their data through visualisations they tend to receive a better number in audiences and engagement is enhanced. Citizens tend to give better feedback to public service administrators.

Civic tech works best when it’s hyperlocal. When building civic technological tools we should build platforms that are focused on a community and particular issue. Kags said no two villages are the same and context matters when building these tools, what may work in Kenya may not work in Brazil, so we should scale in and add new qualities to civic and make it hyperlocal, focused on the local communities. “This can add new values to the community, scaling in your tool can be useful to very specific people and communities.”

“For example, we once worked with a community to collect data on issues they were facing and their immediate needs. After we collected data we sat down with the community and built a dashboard with the user-generated data. Citizens then gave use feedback saying the dashboard does not work for them, so we printed the presentations and posted them up on walls and through this they then engaged with the data and figured out what they wanted most from government was a hospital and sometimes that is the extent which civic tech can assist a community,” Kags said.

Gevers added that to build hyperlocal tools we should focus on literacy and capacity building over or alongside tech and encourage collaboration and building on the momentum and focus on local communities because context and uniqueness when creating civic tech can sometimes work best.

“We need to pay attention to the fact many of the funders are foreign because when the funders leave it makes it difficult for the civic tech initiatives to remain sustainable and this is a problem that we in the community must think about. This is an important conversation we must have because sustainability and sometimes commercialisation is an issue in the civic tech space,” said Kags.

Dijkman said the key thing for SEMA was to provide value to the government as we were focused on improving local services. “We were trying to help the citizens and making them be heard. We felt that we should also prove our value to the government so that way we were presenting the data and informing them, was of such value that they were actually willing to start contributing to our initiative.”

She explained that after the first government funding they started receiving donor funding because it showed that they already had local support. She shared that she thinks that governments that do not have the capacity to develop these necessary tech tools should look into the civic tech community. SEMA is also looking into working with the private sector for funding so that it can become sustainable.

“Whether its donors, government or local donors, the context is important, we need more space for high-risk ability to fail but we must build capacity in the space and we need to take advantage of the fact that we are outside of the bubble and more in the slow sustainable curve. We need to start building meaningful relationships and think of longer terms of 10 to 15 years,” said Gevers. For more on the civic tech funding models, we recommend you read the Knight Foundation’s reporting on the “Scaling Civic Tech: Paths to a sustainable future”

Civic tech should perhaps subscribe to “no hype” and this includes not over-claiming the impacts of tools/initiatives. Let the tools have their genuine impacts for users, civic tech should take up data and visualize the data and allow for reflection by users.

At the end of this session, the speakers agreed that the civic tech space needs to rebuild the citizens’ faith within the community, centralise the users when creating tools, build capacity in government and civil society for civic tech and think critical of funding sources and mobilise localised funding.

If you want to watch this webinar, follow the link below 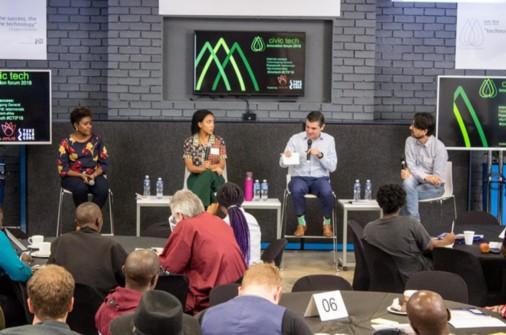 Save The Date: Civic Tech Innovation Forum 2020 to be held this March
By
0
102 Views
Events Blogs

This event is for all people who are interested in how new technologies could enable better services and relationships between government and citizens.

We invite you to come and be a part of this exciting community event! We invite the civic tech community, government and non-governmental including techies, activists, current and potential civic tech users, students and the digital media community to join us at the Civic Tech Innovation Forum on the 18–20th of March.

CTIN annual conferences are intended to enable network members to engage face to face, learn about innovations, tools and techniques, share experiences and meet potential collaborators. They present an opportunity to gain an overview of what is going on in the sector in South Africa, Africa and the world. They also provide an opportunity for CTIN to consult with network members to inform the design of future activities.

This March, the Civic Tech Innovation Network hosts its third annual national convening. The Forum aims to extend its unique convening of South Africa’s emerging civic tech community with the broader potential civic tech user and interest community, both governmental and non-governmental, for the purpose of sharing, learning, inspiration and overall capacity building.

You can expect a dynamic 2-day programme which will include:

Save The Date: Civic Tech Innovation Forum 2020 to be held this March