This crowdsourced information is used for interventions and advocacy showing the scope of the problem. The platform also includes basic information about sexual harassment, how to respond to it, as well as directions for the users to act, such as a report to the police, or get legal support if needed.

Sexual harassment is misunderstood and underreported all over the world. Stigma and shame prevent many women from talking about it or reporting it, and data on the problem is scarce.
Sexual harassment is an everyday struggle that Egyptian women have to endure, and in many cases accept, while going about their daily life

HarassMap's map utilizes web and mobile technologies to crowdsource incidents of sexual harassment from all over the country. Individuals who either experience or witness sexual harassment are able to anonymously submit reports directly through the web interface or through Facebook and Twitter, provided that the report includes some basic mapping criteria – including location and date/time of the incident – the reports are automatically mapped using Google Maps and made publicly available on the HarassMap website.
Each report appears on the map as a red dot that, when clicked, displays the full information of the report in its original language (Arabic or English). Each report includes not only the location and the date/time but also a text description of the incident, the type(s) of sexual harassment (for example comments, stalking or following). Sometimes it also contains additional information on the age or educational level of the reporter and harassed person and whether or not witnesses who intervened are included. Each report receives a response with information on how to access free legal services and psychological counselling.
The data on the map is open for anyone to view and use and serves multiple functions. This includes providing testimony by those who experience or witness sexual harassment as to the seriousness of the problem, serving as data for understanding how sexual harassment is evolving in Egypt, providing HarassMap with information that can be used to tailor communication campaigns and educational programs and serving as a tool to motivate the public to report and stand up against sexual harassment.

Immediately after launching the map in 2010, HarassMap received a large number of reports of sexual harassment, and over the years the crowdsourced data has helped to reformulate the discussion on sexual harassment in Egypt. It has also helped to challenge stereotypes and misinformation about the issue.

HarassMap in 2011 won the World Summit youth Award and 2012 won the Deutsche Welle Best of the Blogs Award for ‘Best Use of Technology for Social Good’.
Since HarassMap was established, they have been approached by activists from over 25 countries for assistance to adopt similar initiatives.

The choices over what platforms and approaches to use to share data was a challenge. The NGO (HarassMap) had concerns over misuse of the data and there was a strong desire to maintain control over access. This was seen as a benefit both from the aspect of control, but also as a way of being able to report on downstream users to funders. The choice was made to commission a server to make the data available. This means the NGO retains control but also places the burden of maintenance with the project.
Another related to language. The text and audio reports of harassment are in a mixture of Arabic and English. The simple data platform that was commissioned did not include sufficient resources to enable search across both language sets. This is in some ways a minor issue as a user can use search terms for both languages. However, it illustrates the challenges of discoverability for data resources in non-English languages.
Research findings show that accounts of sexual harassment reported on a map often provide a much more striking picture of the problem than those derived from in-depth interviews, for example.
Reports received via the map are also fuller and more comprehensive than in the interviews, which may suggest that people are more willing to speak about the issue anonymously online than in person. 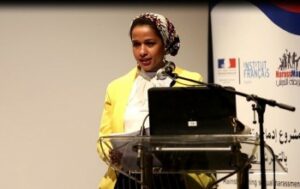