Grassroot is a mobile platform that allows individuals to organize and coordinate between one another for the causes they believe in. Founded in South Africa by Luke Jordan, people can use Grassroot’s meeting, recording, and voting tools to spur greater communication and coordination, allowing them to focus on non-logistical needs.

Mobilizing and organizing takes skill and time and money. So many who might lead do not. Those who do must spend most of their time on basic tasks rather than learning, planning and inspiring.
Grassroot have built a platform to change this. It consists of purpose-built tools that solve real problems for people who wish to organize their communities. It connects such leaders to each other and allows the easy aggregation and analysis of the issues they tackle.

Grassroot deploys mobile tools for community organisers in marginalised communities.
Grassroot is a technology platform that was built to allow people without data and on the most basic of phones, to participate in large scale civil society campaigns, engage in debates, and organize their own community groups.

“We enable participatory democracy and are working towards a vision of a nation self-organizing from the ground-up,” says founder Luke Jordan.

Grassroot Tools
Create Groups - Easily setup a group and use a join code to simply recruit and add people via any phone.
Vote - Call and participate in votes to decide among priorities. It gives everyone with any phone a quick and anonymous say and sends the results back to them as soon as the poll closes.
Search and Recall - Group organizers and members have full recall ability for their groups to see: a record of prior meetings, results of old votes, and records of which actions have been completed.
Call Meetings - Summon people to a meeting and let members confirm attendance. Automated reminders and acknowledgements make organising a breeze.
Create Action Items - Make things happen by assigning action items. It gives everyone a view of group decisions, facts and times associated with them.
Connect - Groups can be made public and can then be found by anyone who searches for them by name. A request to join is sent to the designated group organizer.

Asked how he started the organisation, Luke Jordan, says, “there were two layers of rationale. One was a commitment to trying to help people take collective action together from the ground up and build social capital. Then there was this idea of using simple technology to try and enable that. Those things arrived at different times”.
Luke got his inspiration from his previous work at Mckinsey and the World Bank in China and India, where he was involved in policy dialogue for a while. After working for years developing policy research, that was sometimes not implemented and often applied on the “wrong problem”. Jordan says, that is “when I said I’d like to work on that problem, and I should probably go home to South Africa because that’s where I’m from and that would seem like the right place to start working on this. That was the initial motivation, and that was the reason to work on something in this domain”.
On why he started an organisation with technology, Jordan alludes that when he came back to South Africa, instead of assuming that he knew what people needed, he took some time to figure out what was happening and what people were doing. He says that he found out that there was a “lot of activity happening on the ground, and people were doing a lot, but technology access was very limited”.

Successes:
Grassroot had a massive impact on the 2020 social grant petition’s success. On April 9, an initial SMS was sent to 20 000 people, notifying them of the petition to increase the social grant. Through a sharing function on the platform, once the campaign was signed another cell number was submitted which then also received the petition SMS. This resulted in 530 000 people signing the petition between April 9 and 13.

Future Plans
“There are two dimensions to that, one is just generally scaling up to become a presence nationwide and getting density. With regards to community work and ground-up work we would like to expand our reach, deepen our presence where we are already engaged, and replicate the number of stories”.
“The second dimension is that we are now engaging more with larger scale institutions. We’re trying to talk to various local governments and larger civil society organizations and create partnerships with other organizations that are running campaigns and would like to plug whatever campaign they’re running into tools that can help them reach the people that we work with or are able to reach.”

Jordan says in many of the communities that they worked with; they are seeing the original idea coming through. He testifies that some people have told them that “we don’t have to get that guy to drive around in the pick-up truck anymore, and that saved us money that we can now use to buy bread for when people go out on a march”, people using the Grassroot platform are now saving on time and money. Communities, leaders are able to put resources aside for expanding their reach. Jordan says, “we have seen that in probably most of the places where we have worked for a while now”.
This lesson from Jordan reflects on the need to learn and understand the needs of the people instead of assuming what their needs are. 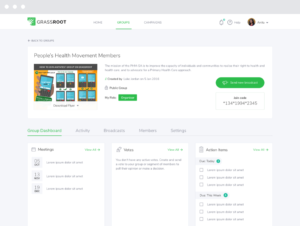