Who can benefit from this study?
Civic Tech initiatives
Researchers

Wazimap, from the Xhosa word ulwazi for knowledge, provides easy access to South African census and elections data. This includes election results from 2011, 2014 and 2016; racial, income, education, unemployment, and access to basic services down to ward level.

Adi Eyal from OpenUp met up with William Bird the Director of Media Monitoring Africa (MMA)in Johannesburg at the Hack a Hacker. OpenUp shared a tool they were working on (at that point looking at municipal issues in Cape Town) and MMA also showed theirs (elections coverage and NewsTols) and agreed to take their engagement forward.

“While our media are overwhelmingly fair, we have found a general tendency across all the media monitored (on average 50 different media titles for each period) to have their elections agenda set by political leaders and political parties contesting. With some clear and often excellent exceptions that prove we have quality journalism, the news on offer tends to be event based, and fails to focus on the bigger issues we face”.

“We had through our work on NewsTools (Churnalism and NewsDiffs) already started focusing on how to make better use of data and explore data journalism. We had an idea that we could try and mash data from the census carried out by Stats SA together with elections results and media coverage. What we were not sure about was how we could do this”.

We know that Wazimap is used by a wide range of people, including journalists, high school geography teachers, political party researchers and academics. It has helped people understand not just where they work and live, but also that data can be presented in a way that’s accessible and understandable.
Code for South Africa has been approached a number of times, by people asking if they might reuse the Wazimap platform in different contexts with different data. Most recently, youthexplorer.org.za used it to power an interactive web tool providing a range of information on young people, helping policy makers understand youth-critical issues in the Western Cape.
We also know that it’s been used as a research tool for books and numerous news articles.
The success of the South African Wazimap has driven the development of similar projects elsewhere in Africa which will be launching soon, though MapIt won’t be used for those because their geography requirements are simpler.

One main challenge was to raise the funds necessary, not only to build a new tool but also help update and upgrade their online media monitoring capacity. A series of meetings between Open Up and MMA resulted in the beginnings of a prototype. Through Openup’s network and exposure, they identified an amazing tool they could adapt, localise and replicate (Census Reporter tool). A lot of work still had to be done to localise, bringing own data, adding own additional elements, including the map as the basic point of entry to the data. “By mashing census, elections and media data we had taken an amazing idea and developed it even further”. (Wazimap).

Wazimap has already proven to be successful that it is being updated again for other countries such as Kenya and Nigeria with a lot of other things planned for the future. 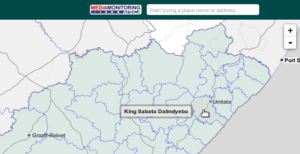