Keeping an eye on the Kenyan parliament

Mzalendo meaning “Patriot” is a website that was developed to help keep track of the activities of Kenyan MPs. Mzalendo is a non-partisan organisation that keeps an eye on Kenyan Parliament with a mission to facilitate public participation in parliamentary processes through information sharing, research, and networking. Through their website, Mzalendo promotes and encourages citizen accountability.

First and foremost, is the lack of transparency around Kenya’s Parliament. We feel that it is a public institution so Kenyans should be easily able to find out, for instance, how many times their MP’s attend parliament. The second was to convince Kenyans to get into the idea of demanding information rather than just complaining about politics without doing anything about it. The idea was to encourage Kenyans’ to ask questions about their members of parliament – what they are doing exactly. Ideally over time people would begin to base their decision – especially during election time on more than just who bribed them or who comes from a particular group or party, but rather who actually did work during the previous term.

"I spent a lot of my early blogging career sort of highlighting all the ills of the government in Kenya and all the corruption and problems. One day I asked myself, well you’re sitting here with this voice and this platform and all your complaining is not really doing anything to make a difference then how can you - within this space - try to have a little bit of an impact. And I think that is what drives me. 'Look, it’s time to stop complaining and start acting.' And I realized that it was not just a problem that was peculiar to me, but to many Kenyans. You know, I think that we watch the news more than any other country that I have been to. We watch news like three times a night and we debate, and we are informed, but that is where we stop. We do not act. So Mzalendo has always been a challenge to me to say, 'OK, enough talking, some acting." Ory Okolloh, transparency.globalvoiceonline.org

Mzalendo has worked with various partners to develop their site such as mySociety, a UK based charity running most of the best-known democracy and transparency websites in the UK. MySociety assisted Mzalendo to improve and enhance their website, according to mySociety, during the years of partnership, Mzalendo kept the site maintained with data and news, while they worked on the development of new features they requested, fixing any bugs that arose, for example when the Kenyan parliament changed their data outputs, and hosting. Mzalendo was built on open source code, everyone is free to inspect, reuse or just take inspiration from it. Other partners that worked with Mzalendo include Omidyar Network, Uwezo, and The National Taxpayers Association.

Before the partnership with mySociety, Mzalendo was operational, in 2012 the site relaunched after the assistance provided by mySociety who then handed over the site back to them. mySociety commonly used the Pombola codebase an open source code, the same that was used in developing Mzalendo. This was aimed at making the handover easier for the new developers taking over the site. 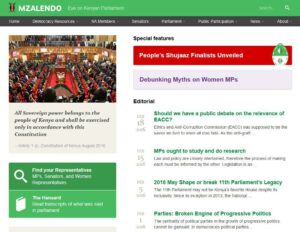